skip to main | skip to sidebar

God told Joshua and the Israelites to gather twelve large stones and carry them into the Promised Land as a memorial to future generations of what God did for them at that moment in their history.  .  The twelve stones is assumed to represent the twelve tribes and each tribe had a stone to call their own.  Their own claim or part of the whole. 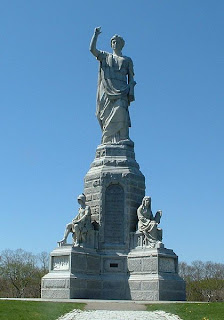 America has its own version of this milestone in the form of a monument entitled "The National Monument to our Forefathers." This monument is a hidden jewel in America located in the offskirts of Plymouth, Massachusetts.  This jewel was recently uncovered by Kirk Cameron in a documentary film Monumental in Search of America's National Treasure.  Kirk Cameron goes and traces back the voyage of our forefathers to America recounting their story with the true and not so pretty details.

Cameron also discusses in depth with a historian the meaning of this monument that was left behind for those of us to remember where we came from.  It gives us the framework for which this country was founded.  The person at the top is Faith pointing heavenward to where our authority comes.  She is holding a loose-leaf Bible in her hands.  The others surrounding her are Education, Morality, Law, and Liberty.  This monument signifies a definite milestone moment in America's history that clearly gives all of the credit to God and what He has done through a people willing to becoming stepping stones for this great nation.

This is America's twelve stone moment.  The principles that this monument represent should lead any logical person back to God as the author of it all.  I was privileged to go to a Christian school where I was taught all of these principles and the value and truth of my Christian heritage.  I was also fortunate enough to go to Plymouth and Boston for my senior trip and see this monument face to face.  In my little Christian school bubble, I had not realized until now that this monument was not well advertised and was hidden from view so to speak as well as the truth behind the founding of out nation.  We are living in difficult times where truth is what you want to make it.  Truth is not valued because everyone can't decide what standard to measure truth by.  As for me, Jesus states it plainly, "I am the Way, the Truth, and the Life: no man cometh unto the Father, but by me (Jn 14:6).  He is our standard.
Now to bring this to a personal level, what is your twelve stones moment?  What are the moments in life that you had to mark whether physically or mentally as moments only the Lord could explain.  The defining moments of life...the ones you will pass down to your children as an example of what to do or what not to do.  These marks will serve as reminders to inform others of what God has accomplished in your life.  Don't forget to remember.